Exercise done for the Project of the Scientific Direction “New Chronology” – НЕВ ХРОНОЛОГИЈАА – directed by the professors A.T.Fomenko and G.V.Nosovskiy

Representation of the Global Chronological Map of the “New Chronology” (Part 3) V.3.0

“Created finally in the XVI century A.D. and accepted today chronology and history of the ancient and medieval world, evidently contains big mistakes.

Many outstanding scientists understood it and discussed during a long period of time. But it appeared to be a difficult task to build a new, non-contradictory concept of chronology.

Starting from 1975 a group of mathematicians, mainly from the Moscow State University, were engaged in the development of this problem. Interesting results were received and published both in scientific periodical print and in separate monographs. We underline, that new concept of chronology is based, mainly, on analysis of historical sources WITH THE METHODS OF MODERN MATHEMATICAL STATISTICS and vast COMPUTER CALCULATIONS.

The task of chronology is to put in order the events into proper way on a temporary scale based on the available information. This task naturally fits into the field of applications to modern mathematical statistics, theory of information. The methods of humanities, one of which is history, are not enough for solving chronological issues. New chronology imposes another psychological picture of perception of the antiquity. Now the word “antiquity” should be connected with XV-XVII centuries A.D. that is with the events, distant from us on 300-400 years. Expression “high antiquity” should now relate to the XIII-XIV centuries A.D. And the words “the highest antiquity” – are already the XI-XII centuries A. D. BEFORE THE X-XI CENTURIES A.D. THE EPOCH OF SILENCE OF WRITTEN DOCUMENTS COMES. (See the book RECONSTRUCTION).
Our analyses of the chronology and history opened a striking circumstance. Based on the applied by us mathematical methods it was proved, that the Scaligerian chronology, and therefore also the Scaligerian history of the “antiquity” and the Middle Ages, is totally wrong. Moreover, it appeared that our history right up to the end of the XVI century was consciously falsified at the epoch of the XVII-XVIII centuries. “

The purpose of this section is not to document the dating methods offered by the “New Chronology”, is to make a brief statement. More information at:

You can also consult the following link: http://chronologia.org/sp/diagrama_global/metodos_de_datacion.html

But the “New Chronology” (or NC) raises a reasonable doubt: “What is the scientific certainty of the dating of the ancient facts?”

In fact, the NC shows that the official chronology is an arbitrary reconstruction, dilated over time. To begin, it shows that traditional dating methods are not correct. His work is extensive, and is oriented in the following areas of analysis:

For that reason the NC creates new methods of dating, which are demonstrable empirically and scientifically. The main blogs are the following:

These methods, contrasted together, point to the following statement: The global chronological map is based on the medieval history of the 10th-17th centuries, and is extended with the manipulation made during the 17th and 18th centuries.

Specifically, the NC concludes that throughout the 17th and 18th centuries the past is rewritten, dilated, and then the official chronological map and the accompanying history are created.

Astronomical dating is possible. The analysis of documented eclipses (old ones are counterfeits), of horoscopes and ancient zodiacs shows an alternative history. All history is contracted in “real” time. As a synthesis, these are the main results:

Mathematical-statistical dating is possible. The NC has developed the following methods, which complement the astronomical analysis:

The reconstruction of dilated history, in a new chronological map, is possible. The NC has reconstructed the main axis of this “New History”, and allows to establish the basis of a global reconstruction.

Two Covenants that transform the past

Beginning and finishing of the Ark of the Covenant

This graph shows the main idea of ​​this exercise. Understanding this idea allows us to reconstruct the historical narrative that leads to the deliberate dilatation of history.

The NC states that in the mid-17th century implodes the Mongol Empire, which from 1380 would have governed the world. But, since the year 1486, in the year of the Apocalypse, a pact, or alliance, between the Horde and the Ottomans would have been established. This is the year that “hides” the prophecy, through the horoscope described in the Apocalypse, as decrypted by the NC. And the prophecy, in its key chapter (eleventh), speaks of the Ark of the Alliance (Covenant).

This “ark” would be, according to this exercise, the Ark of the Solomon’s temple, which was guarded by Prester John between 1486 and the 17th century. The lineage of Prester John would be that of the last Great Khan, as the official history recognizes. Also, “real history” would be different. This stage would correspond to the period of maximum expansion of the Januese army (mistakenly “Genoese”), which would refer to John. And it would be, also, the “Templar” army, of the Order of the Temple of Solomon, which is later transformed into the Order of Saint John. For this reason, as it deciphers the NC, Solomon really stands in the 16th century, in Constantinople, the “true” Jerusalem, next to Yoros.

This story, however, would have a turning point in the 17th century. Since then, the powers of the Holy Land would be occupied by the Ottomans, and from Western Europe an alternative project would be created. This episode would be the beginning of the Pope of Rome, which the NC locates around the second half of the 17th century. This “pope” would be the new Prester John, the last Great Khan, who would be accompanied by the project of a new Holy Roman Empire (of the German Nation). As deciphered by the NC, throughout the second half of the 17th century, the Pope and the Holy Roman Empire appear, and this exercise explains this in this way.

In the historical narration, the Vienna Treaty of 1725 represents the moment in which Europe and the Holy Land seal the new power of the world. Between the 17th and 19th centuries, Europe would mark the fate of humanity, and would impose the Official History that we now know. An alternative past would be created, and in this past an artificial papacy would be located, and a Holy Roman Empire also artificial.

Result of the change of powers, the Januese Order would be transformed. Initially, the Order is transformed into a papal army, until Napoleon occupies Genoa, Malta and Rome, as well as Egypt and Palestine. But Napoleon fails, and so does the Order of Malta (Januese, or of St. John), the Republic of Genoa (Janua) and Rome, with the papal project. Likewise, the official chronological map has already been established.

Otherwise, throughout the 19th century, the past would be rewritten, creating a false past from the real project of Napoleon, which would have been to reconstruct the Empire that implodes in the 17th century. Italy would be fragmented in many independent states, but the Savoy would reconstruct it. The Savoy would occupy the Pontifical States, while the papal project would be disavowed, giving prominence to a new imperialism, the economic one.

The deliberate distortion of the Ark of the Covenant (of Solomon): 185 years transformed into 555

This graphic shows the historical narrative that reconstructs the NC, which is articulated with the main event leading to chronological manipulation.

As described by the NC, around the 16th century a double sacred book is created: ancient history and the Bible. And everything would be the same chronicle, the expansion of the people of God, Israel, between the 12th-16th centuries. At some point, between the 16th and 16th centuries, 1000 years would be created. The reason? To create a legendary past for Christianity, for Christ and for the Roman Empire, giving it the peace of Christ. It would be the “Pax Romana”. But in the 17th century implodes, and between the second half of the 17th century and the 18th century would also create a recent dilated past.

This story may seem complex, and it is, and is largely documented by the NC team, but in this exercise a complementary hypothesis is explored. The hypothesis is that between the year 1486 and the middle of the 17th century there is an Ark of the Alliance (Covenant), of Solomon, which in the 18th century is rewritten in 555 years. In this way, the Temple Order of Solomon would be separated symbolically regarding Suleiman the Magnificent (Solomon), and the false chronicle of the Palaiologos and the Genoese, unrelated to the Templars and Suleiman, would be created. As described here, the Templars would be the power of Genoa (or Janua) and also the power of Suleiman (Solomon). But the official history would have altered everything, in a codified way. The jump would be 185 years, and it would be triple. 185×3 = 555.

This graph represents the codification of the deliberate modification of the protagonists of the Ark of the (Solomon) Alliance. The Order of the Temple of Solomon would be separated from the Januese power (Genoese), and Solomon (Suleiman).

The year of the birth of Christ would be in 1152, and the year of his martyrdom in 1185, as described by the NC. Over the course of two centuries, there would be two calendars, in which 1583=1768 (year of J.J.Scaliger’s work) and 1630=1815 (year of the fall of Napoleon, and a year before the historical death of myths of Shakespeare and Cervantes).

Several numbers accompany this symbolic reconstruction. The year of the last version of the Catholic bible would be 1777, 185 years after 1592, the “official” year. The “777” would not be casual, it would be a perfect number, preceded by 1000 years of peace, symbolized in ten centuries (“X”=Christ) and the number I (“I” = Iesus), as the NC recognizes.

This graph represents the reconstruction of the “real” calendar, in the line of work proposed by the NC. The NC identifies the year 1185 as the martyrdom of Christ (martyrdom of Andronikos Komnenos, the Roman emperor). Well, in accordance with this complementary reconstruction, this martyrdom would have represented:

In this way three conclusions that resolve the NC are corroborated: 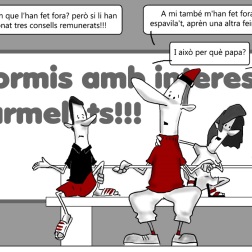 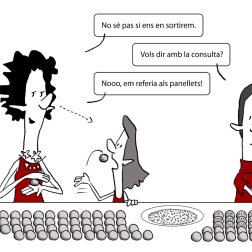 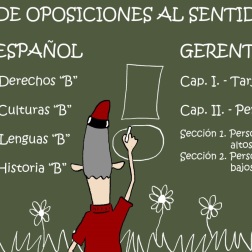 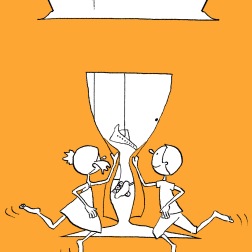 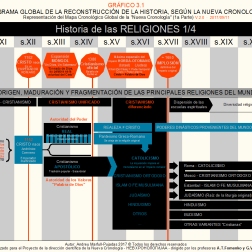 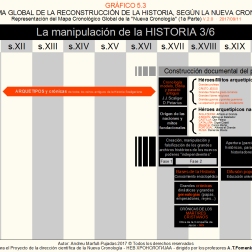 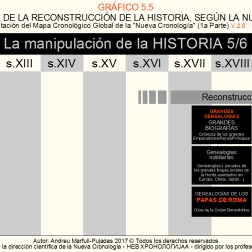 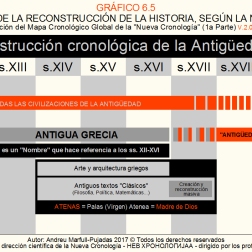 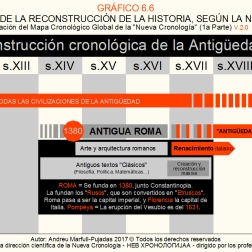 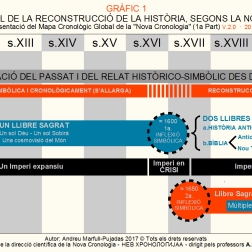 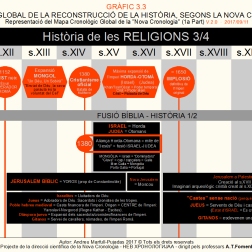 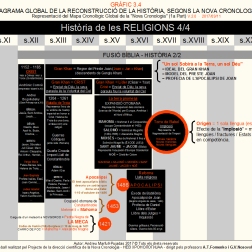 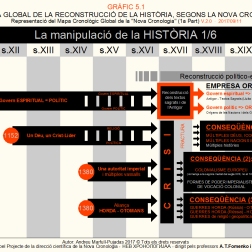 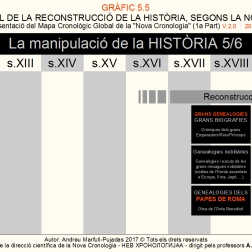 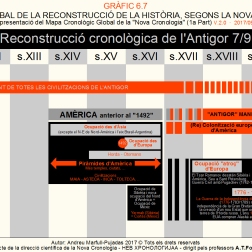 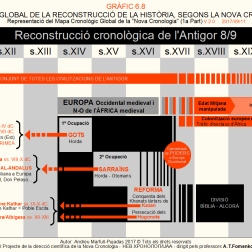